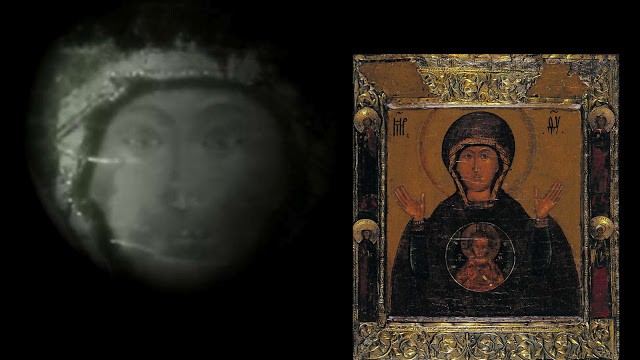 In the Shadow of Tabor (Im Taborschatten)

Images of orthodox icons are transformed into lively and animated phenomena that appear like living persons.

Thomas Koner’s audiovisual installation “In the Shadow of Tabor / Im Taborschatten” was created for Salon of the Museum of Contemporary Art Belgrade, in collaboration with Goethe-Institut Belgrad and Ikonenmuseum Recklinghausen.

The installation consist of five videoprojectionss, based on the scanned images of selected icons from the collection of the Ikonenmuseum Recklinghausen. Originally still images now become enlivened faces of the saints, whose piercing glances are cutting through darkness of the space, observing the visitors. As the visitors move through the ‘nave’ like space of the exhibition area, the eyes of the saints follow them, revealing that the boundary between ‘ordinary’ onlookers and ‘holy’ spectators is becoming more and more permeable.

Corresponding with the reverse perspective of the icons’ pictorial technique, the quadrophonic sound creates a kind of X-ray – sonic after-images and sound residues become perceivable as a sonic language that is glowing in the Shadow.

The name of the installation comes from the term ‘Taboric Light’ used by icon painters to describe the source of light and its quality that illuminates the painted pictorial image space of icons. It is named after Mount Tabor, where – according to biblical legends – three disciples experienced the transfiguration of Jesus as a light phenomenon.

Here, the transfiguration of the saints occurs in the shadow of the nave and in the mind of the visitors.

Icons Before and After

In The Shadow Of Tabor / Im Taborschatten

Icons Before and After